In eighth grade, Vance Byrd was surrounded by the Battle of Atlanta.

A school field trip took him to the Atlanta Cyclorama and Civil War Museum, built around a massive cylindrical painting of the Civil War battle. Created in 1882 by 17 German artists, the painting is 40 feet tall and longer than a football field, and completely surrounds viewers with the painted battle scene. There’s an audio component, too: the recorded voices of Civil War veterans and an official narrative.

“It was supposed to make you feel like you were there,” said Byrd, now the Frank and Roberta Furbush Scholar and Chair of the German Studies Department at Grinnell College. 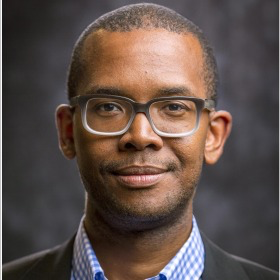 As a teen, Byrd wasn’t particularly impressed, he remembered. While cycloramas were the apex virtual reality experience in the late 19th century, they were soon outstripped by the emerging motion picture industry. Today, only a few 19th-century examples remain in the United States: The Battle of Atlanta and Paul Dominique Philippoteaux’s 1883 The Battle of Gettysburg, on display in the Gettysburg National Military Park.

But they’re not the only examples currently on display. In 2017, Los Angeles-based African-American artist Mark Bradford unveiled Pickett’s Charge, his answer to the Gettysburg cyclorama.

Bradford’s artistic commentary on the Gettysburg cyclorama was the subject of Byrd’s Feb. 25 lecture, “Cut and Paste: Unearthing the Past in Mark Bradford’s Pickett’s Charge,” sponsored by the Material and Visual Worlds Transdisciplinary Area of Excellence. On Feb. 26, Byrd also led a graduate workshop, “Does It Sound Right Now? Narrating the Battle of Atlanta,” that explored the use of sound in the Atlanta Cyclorama, and how it reinforces views of race, subjection and nationalism.

The son of a beautician, Bradford first entered art school in his 30s. As a gay man, his experience was shaped by the AIDS epidemic, and he also found inspiration in Black feminist thought.

He often uses “paper ephemera” in his pieces, including neighborhood advertisements, scrap paper and the endpapers used to wrap hair in salons. His mixed media artwork takes a variety of shapes, textures and forms; the visually abstract Scorched Earth (2006) was inspired by the Tulsa race riots in 1921, while the massive Mithra (2008), made of paper, plywood, shipping containers and steel, commemorates Hurricane Katrina.

Currently on display in the Hirshhorn Museum and Sculpture Garden in Washington, D.C., Pickett’s Charge layers images from the Gettysburg Cyclorama, shredded, glued, tied and dyed into new configurations.

It’s important to note the subject of the original Gettysburg cyclorama, which informs Bradford’s work: It depicts Confederate Major General George Pickett’s charge against the Union army on July 3, 1863. While it’s ultimately a scene of defeat, the cyclorama’s imagery and soundscape also perpetuate the Lost Cause ideology that continues to persist in the United States.

Unlike the original Gettysburg cyclorama, the eight canvases that comprise Pickett’s Charge can’t be viewed all at the same time.

“It breaks the illusion of continuity,” Byrd said. “It is not easy to take this scene in.”

Here and there, ghostly figures from the original painting emerge: grim-faced soldiers, cannons, horses. Images take new and eerie forms: battle scenes mixed with the sky, strips pieced together in the form of a giant wave or a branching tree.

Bradford likens his own artistic methods to laceration, Byrd said, although they can also be seen as a form of scarification. The end product literally takes the canvas apart to call into question notions of American exceptionalism and shine a light on the country’s legacy of violence.

“Pickett’s Charge asks us about the place of African-American life in an abstract battlefield,” Byrd reflected.